The Sun has yellow eyes which dispense honey, his body is square, he is pure, bilious (pitta) in constitution, intelligent, masculine and tends towards baldness. 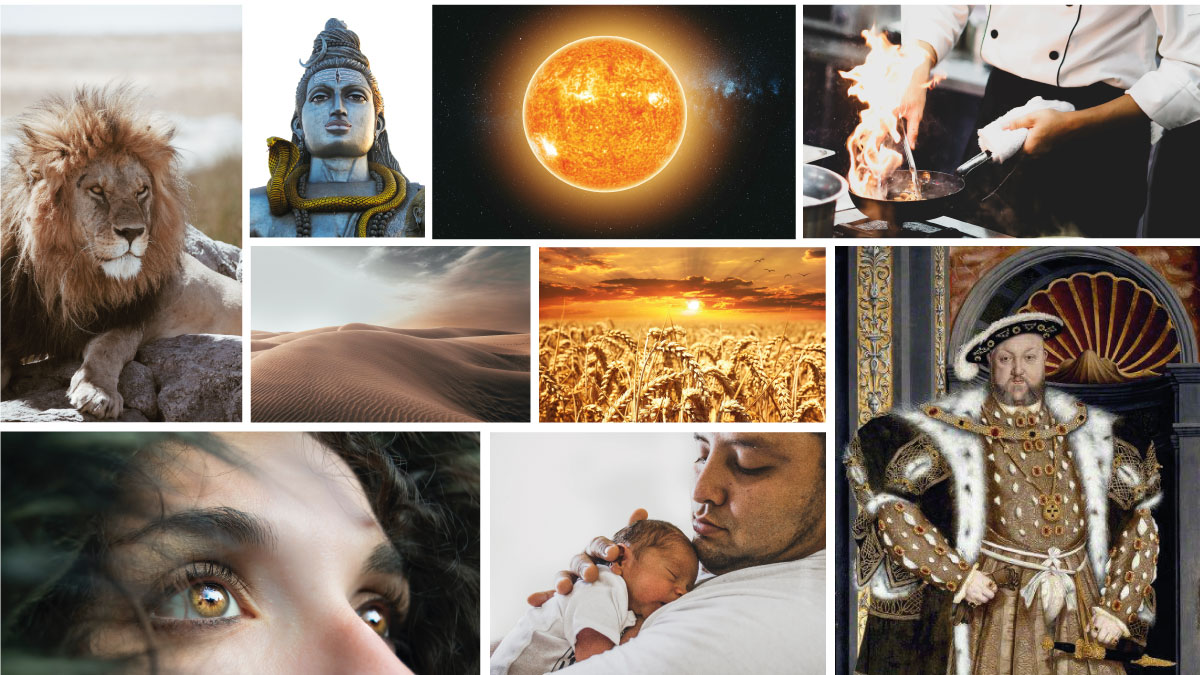 The Sun is the brightest and the most important planet, as he sheds light on all of the other planets in the solar system, they shine because of his reflection.

Vedic Astrology is known as Jyotish, which means light, the only planet in the solar system that has the power to illuminate is the Sun. He is the primal fire and has been worshipped for thousands of years in many traditional and indigenous cultures because of the bounty and life force that he provides.

In our birth chart, the Sun represents the self, the body and our personality, on a deeper level, it means the soul. The same soul comes back lifetime after lifetime to find its liberation, the soul that is our inner light. Through the perception of the Sun in our birth charts, an astrologer can see the divine will of a person's soul and capacity for spirituality and illumination.

On a physical level, the Sun represents the body, our digestive fire, which gives us energy and the heart which circulates our vitality. The eyes particularly the right eye and the bones are strong indicators of the Sun. A robust sun depicts good eyesight, a sturdy frame, healthy bones and good mineral content within the body as minerals in the earth are also under the Sun's domain.

Our will and inner strength can be measured by the power of the Sun in our birth chart. Confidence, self-reliance, intelligence and our ability to inspire others  are a part of his repertoire. Representing the Father, the Sun's position in our chart can depict his ability to instill these characteristics in his children and how we, as children relate to our fathers.

Those in positions of authority, status and nobility, successful members of the government or political figures, popular Kings and Queens, have an innate air of command and leadership that a favourable sun bestows. At it's finest, the Sun will give commitment, courage, steadfastness and an independent spirit. The Sun's placement in a birth chart can tell you how they relate to people and whether they have a high moral compass that people look to for inspiration.

A well-placed sun is represented by a healthy ego and a sense of inner confidence. When we talk about ego, it can connotate an egotistical nature, but this a trait of a malefic sun, where one falls prey to a lack of confidence bringing about an inflated ego. An intense but malefic sun will make a person manipulatively charismatic; they will shine but use that power for their own devices in a negative way.

Professions indicated by the Sun are those who promote vitality, like physicians, yoga teachers or herbalist and those who work with fire and heat like cooks or steelworkers. Entrepreneurs also feature under the Sun's domain due to his fiercely independent spirit.

So, on Sundays, treat yourself to walks in the woods, meditation at a sacred site or a sip of your most priceless elixir.

The Sun gives the power of independence,The capacity to become a value or light unto ourselves.

~ David Frawley - Astrology of the seers

This is me at the weekend waiting for my next clie

Marma points are junctures in the body where two o

Bitter foods are inherently cooling with the excep

Sour foods are heating, with the exception of lime